JUDY WOODRUFF: The nation echoes again tonight with protests over police using excessive force against black Americans. And there are mounting calls for wholesale changes in policing. All of this comes amid final farewells for the man whose death galvanized a movement. White House correspondent Yamiche Alcindor begins our coverage.

ALEA ROLISON IKELE, Mourner: His death, it's changed the world. It sparked this world, this change. And no matter what, things have to change, and things have got to be different.

YAMICHE ALCINDOR: Separately, the presumptive Democratic presidential nominee, Joe Biden, and his wife, Jill, met privately with Floyd's family. Meanwhile, in Minneapolis, Derek Chauvin, the now-fired police officer who pinned Floyd to the ground with a knee on his neck, had his first court appearance. He faces an upgraded charge of second-degree murder. Bail was set at $1 million. Floyd's death two weeks ago has sparked nationwide and now global protests against police brutality and systemic racism. In the U.S., massive peaceful protests continue across the country, from small towns and suburbs to thousands in large cities, like Los Angeles, where an estimated 20,000 people came out on Sunday. L.A. prosecutors today announced they will not charge thousands of protesters who've been arrested for curfew and other violations. And in Washington on Sunday, Republican Senator Mitt Romney of Utah marched with protesters near the White House. Today, in Washington:

REP. KAREN BASS (D-CA): The world is witnessing the birth of a new movement in our country. 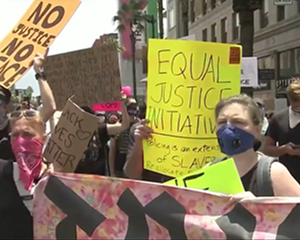 YAMICHE ALCINDOR: Congressional Democrats introduced a sweeping set of policing reforms in response to Floyd's death and protesters' demands. The Justice in Policing Act bans choke holds, develops a national standard for use of force, limits the transfer of military weapons to police departments, defines lynching as a federal hate crime, establishes a national police misconduct registry, and limits qualified immunity, which protects officers from lawsuits over alleged misconduct. Congressman Hakeem Jeffries of New York is among those leading the push.

YAMICHE ALCINDOR: Today, House Speaker Nancy Pelosi urged the Republican-controlled Senate to consider the bill. For his part, President Trump has not put forward a plan to address policing and systemic racism. Today, he led a roundtable with law enforcement officials. He and his campaign have attacked Democrats, including Vice President Biden, for wanting to-quote-defund the police.

YAMICHE ALCINDOR: Today, Biden's campaign pushed back and said he-quote-does not believe the police should be defunded. In Minneapolis, nine of the 13 City Council members have called for dismantling the police department and replacing it with a new public safety system. Other proposals, backed by progressive activists and a few elected officials, do not call for police departments to be fully abolished. Instead, they push state and local governments to decrease police budgets, while increasing spending on things like education and housing. Now outside the White House, people have gathered to protest for yet another day. They have been doing this for more than a week. They tell me that they are going to continue to peacefully gather here until America confronts in a meaningful way the devastating and often deadly impact of racism-Judy.